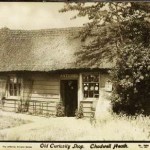 A thatched cottage near the High Road, Chadwell Heath, with 2 rooms on the ground floor. One room acted as a bedroom and facing the bed was a saddle. The garden had dog kennels and chicken pens but there were no animals living there just cobwebs. The property had been condemmed as unfit for human habitation in 1880. A picture of desolation and ruin.

This description formed part of an Inquest held in Feb 1895 into the death of an elderly lady living at the cottage, despite its poor condition. A sad ending to what was a very romantic story.

The lady was 90 years old, the saddle facing her bed a reminder of her younger years. She had been a first class horsewoman, often seen riding a cream coloured horse and helping her husband to break in colts. But her miserable surroundings tell nothing of her story nor perhaps why her family had not stepped in to assist her.

Mrs Frances Overington was born in Greenwich to a wealthy family, the Bouchiers, and in something of a Downton Abbey scenario she fell in love with the family’s coachman much to her father’s displeasure.

From 1851 on John Overington is shown as an annuitant or fund holder, presumably the ex-coachman and Frances’ family had come to some agreement, although the fund would appear to have been Frances’ rather than her husband John’s. When John died on 2 Jun 1874 aged 72 he left £10. Frances left over £4000.

None of the census show any children living with the couple and they seem to have stayed at the same cottage throughout their married life.

The cottage was sold to Mr A Wallis of Romford who decided to open it to the public over Easter with a small admission fee, the proceeds to Romford Vitoria Cottage Hospital.

Those interested in finding the family please note that on one well known website the surname has been transcribed as Daerington (1871), Corrington (1861), Conington (1851).