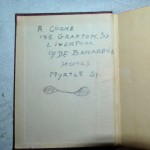 We have recently been contacted by a lady living in Sunderland, Ontario, Canada who  found a prayer-book in their house around 20 years ago. She is now moving and remembered the book and would love to return it to the family.

The book has a note in the front written in a child’s hand, probably a young child.

He or she had been living at 195 Grafton Street, Liverpool, UK, and as the note includes (Care of?) Barnardo’s Homes, Myrtle Street he or she was probably one of the child emigrants to Canada under the British Home Movement. Between 1882 and 1939 Dr Barnardo’s sent 30,000 children to Canada.

The Liverpool Sheltering Homes rescued destitute and orphan children, in around 1889 they moved to new premises in Myrtle Street and in 1925 amalgamated with Dr Barnardo’s.

Given the inclusion of Dr Barnardos in the note the writer was probably there after 1925.

So can any one shed any light on the family or owner of this prayer book please do contact us: 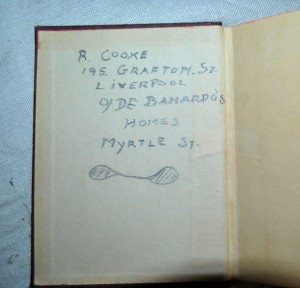 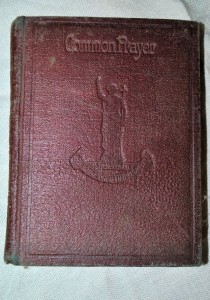 We have found a Robert W COOKE born about 1898 who travelled from Liverpool on 11 Oct 1906 to Quebec with Barnardo’s and was living with John McKin and family in Middleton, Norfolk, Ontario in 1911, (listed as Cook, rather than Cooke) but he would not really match with the 1925 merge of the Sheltering Home with Barnardo’s given the 1906 date of travel.

The Library and Archives Canada Home Children 1869 – 1930 has a searchable database see here.

Robert W Cook, married in 1922 to Winnifred Victoria Fines, neither bride nor groom knew the names of their parents.

Lori of BritishHomeChildren.com has contacted us, looks like she has found the likely owner of the Prayer Book: