↓
Home→Articles→24th February 1944 : how MARLY came close to being destroyed Log in

The following article has been written and produced by Stephane Cottel and reproduced here with his kind permission.

The 24th February 1944 was considered a terrifying evening by the inhabitants of the village who experienced it. An unforgettable night and a catastrophe, whereby the village could have been destroyed, closely avoided.

It was about 9:20 pm on the evening in question when the village inhabitants were woken from their slumber by the early warning sirens from the town nearby. Nothing to untoward there as the inhabitants of the village were used to the single, long siren wail, signalling an « early-warning » each time allied air-forces were approaching enemy territory. Soon enough though the sirens started wailing anew, this time over and over again with short gaps between each siren wail. The level of danger had increased as this was the full air-raid siren , indicating enemy aircraft in local airspace. As usual the inhabitants quickly went outside and started to search the skies for signs of the approaching aircraft. They showed no sign of fear or worry, as the british for it was surely british aircraft hadn’t yet bombed the two annexed regions of Alsace and Lorraine. Indeed these raids on the German « homeland » would surely hasten the very liberation of their own land !

Patiently they search the dark sky, covered by heavy cloud. Suddenly they are able distinguish the humming sound, far off and as yet unclear, of aircraft engines but which is getting closer and closer and more and more distinct as the seconds go by. At the same time the anti-aircraft spotlights furiously search the sky and the german anti-aircraft (AA) guns bark out and fill the sky on all sides.

Seemingly unperturbed and flying at 20 or 25 thousand feet the R.A.F. Bombers continue wave after wave sweeping ever eastwards. Now and again when a break in the cloud covers permits, the inhabitants are able to make out the dark and furtive silhouette of the allied aircraft.

-«God knows what is in store for them tonight, a curious onlooker mutters quietly, Judging from the sound of the engines those bombers are well-laden. » 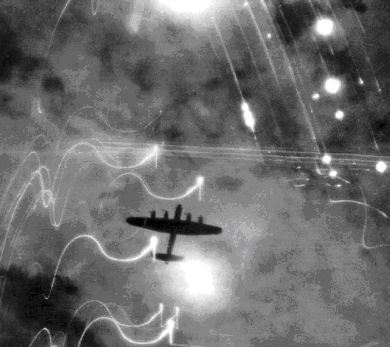 By « them » they are obviously referring to the Germans as for the majority of the inhabitants, not withstanding the few « Siedler » (german settlers brought into the village), each allied bombing raid is met with a sense of satisfaction and inner contentment mixed with a feeling of recognition and half concealed hope by the village inhabitants.

Suddenly a large red light illuminates the night sky out to the west. All eyes instantly sweep across to this new sight. It comes from a burning plane most probably a lucky hit by the german AA guns. The plane is losing altitude quickly and seems to be heading straight for the village. Indeed as the plane is coming down consumed by the flames coming out of its starboard wing it gets closer and closer to the village. Panic ensues amongst the inhabitants. The onlookers hastily seek refuge indoors and seal themselves in fearfully awaiting what happens next.

Suddenly a tremendous explosion violently rocks the entire village accompanied by severe heat and power from the blast annihilating everything in its path. Windows are shattered, tiles blown off, ceilings cracked, those windows and doors blown from their hinges continue to open and close spontaneously and pieces of furniture wobble. No residence is spared ; some inhabitants who were sleeping spring from their beds terrified, others are under the impression that the village is being bombed. It was in fact the burning plane which had just exploded near to the mill located on the banks of the Seille river. The explosion resulting from the burning fuel tanks located in the plane’s wings set fire to and destroyed the mill building. Fortunately the mill keeper Mr Pierre HESSE and his family emerged unscathed from the accident although Mrs HESSE did injure her arm.

A few minutes before sparks and burning debris fell onto the house of Mr Joseph HANRIOT located near to the mill and the railway station resulting in an outbreak of fire which was quickly brought under control by the inhabitants. Another fire broke out at Mrs ATTONATI’s house close to the church most probably as a result of an exploding demijohn full of alcohol. Fortunately the bombs from the plane which fell on both sides of the river and the adjourning fields had not been armed and did not explode. The village certainly had a narrow escape that night and even today the locals shiver at the thought of that terrible night.

Several bodies of the airmen were found lying near to the site of the crash. One body was found on the ice of the banks of the Seille behind N° 26 rue de la Gare, another was found near to the rue Mariet Prè where today the house N° 2bis can be found, a third body was found in the field behind N° 54 rue de la gare. A 4th body was found in the garden of Mr Louis LEROY by the Chemin des Paquis along with one of the engines of the plane. The mutilated body of the 5th airman was found lying close to the crash site in the garden of where N° 10 rue des Chevrus now lies. The 2 remaining airmen both more fortunate managed to parachute to safety before the plane exploded, landing in AUGNY where they were rapidly made prisoner, given up by the « Siedlers ».

The following day at daybreak the extend of the damage caused became clearer to see. All the windows in the mill area of the village had been blown out and gaping holes could be seen in the roofs of the houses. Immediately both the local authorities and the germans started work to repair the worst of the damage but this took a number of weeks to complete. A bomb was found stuck in the ground of a garden, another had landed flat in a farmyard. Near to the mill an enormous crater has formed probably the result of one of the bombs exploding. The bodies of the airmen were gathered together on the embankment lining the path which ran from the mill down to the river Seille, on the left close to the intersection with the rue de la Gare. The poor British were left on display all day long and due to the presence of a number of locals the occupying germans decided to suppress the funeral service and hurry the burial.

The airmen were hastily buried in the early hours of the 26th February 1944 with no blessing or military honours. Life in Marly returned to normal. It was only 2 years later upon the initiative of Mr Jean THIRIOT, president and general secretary of the local section of the escapees and resistance movement for Moselle that a commemorative ceremony was organised on the 24th February 1946 to honour the 5 heroic allied airmen killed in action.

A wooden cross bearing the inscription « Here lie 5 heroic allies, who gave their lives for the liberation of our country, the 24th February 1944 » was erected on the naked burial mound which was their final resting place An important delegation was present that day. Besides the honourable Mayor of Mary and his local council members, a number of key figures from the local area and delegations from the different armed forces and patriotic associations were present. Amongst the key figures present were Mr Jacques BAUMEL Gaulliste Member of Parliament for Moselle ; Doctor BURGER chairman of the F.N.D.I.R.P. ; detachments of the Airforce from Frescaty and the regular army as well as a detachment from the Resistance Fighters association and Resistant from the Metz urban police force etc…… 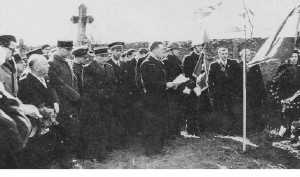 In his poem, Mr Jean THIRIOT evoked the sacrifice of the 5 allied airmen « fallen from the glory of the sky to the earth in Marly, for the liberation of our nation » Infront of a deeply moved and contemplative crowd Mr THIRIOT read his poem by way of a funeral oration for the deceased airmen. 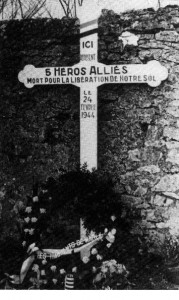 In 1948 a british military commission following a joint initiative by Mr Robert SCHUMAN the then MP for Moselle and Foreign Affairs Minister along with the Resistance Fighters association, came to the cemetery to carry out the exhumation of the 5 airmen in order to fully identify them. At the conclusion of this operation 5 granite headstones were erected above the 5 tombs and a commemorative plaque indicating their resting place was fixed to the entrance of the cemetery.

To this day the five airmen rest in peace in the old village cemetery in Marly. Their graves are kept flowered all year round and certain villagers ensure that they were and remain forever the soldiers who « liberated » our sweet Lorraine from the vice of the thuggish nazi invader. 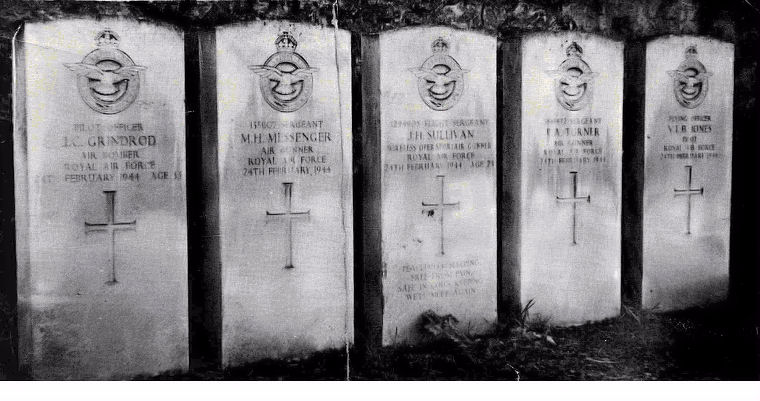 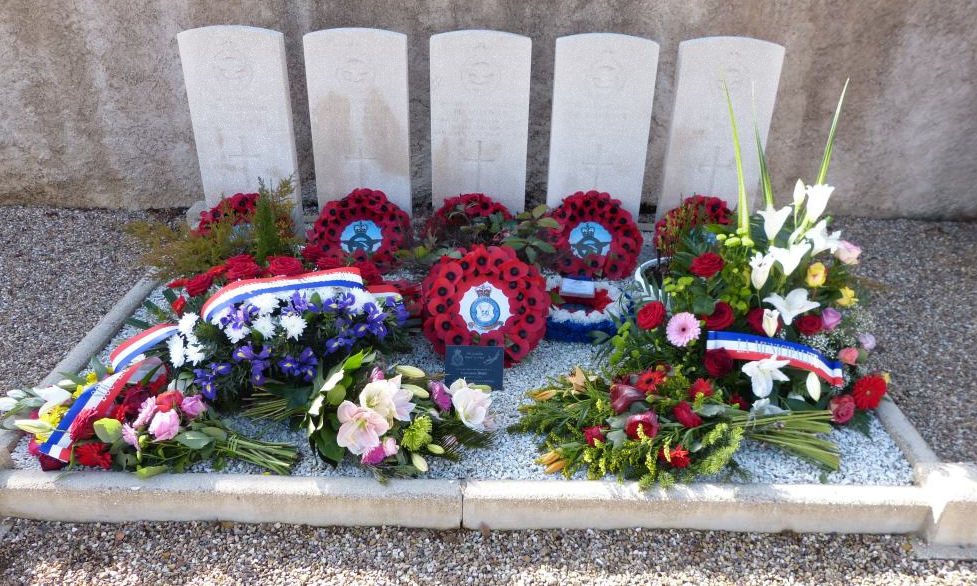