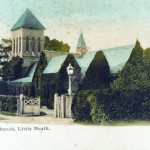 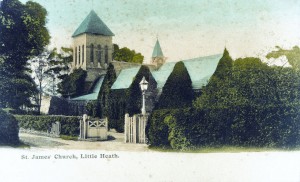 It was erected by the only gentleman in the neighbourhood, Captain Ibbetson and was built in the grounds of his house, Little Heath House, under his own supervision and to his own design and without the assistance of an architect.

The chapel was in the form of a patriarchal cross, the builders and labourers were all local men, residents of Chadwell Heath. The cost was around £2000 and presumably built because there was no church nearby or not within 4 miles. Many local residents admitted they had not been to church for some time. This may go some way to explaining the breach of Sunday trading laws at the Crooked Billet! 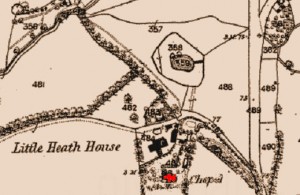 The Essex Standard and General Advertiser of Wed 13 Aug 1862  reports that The Hon. Rev. Henry Bertie D.C.L, vicar of Great Ilford commenced the opening ceremony with morning prayer, the Rev. John Chittenden previously a missionary in California read the first lesson and Rev. George Martin Braune formerly vicar of Wistow Yorkshire read the second lesson and that Rev. W. F. E. Knollys preached. The organist was Mr Dawson and the choir of Barking Church were also in attendance.

After the service a meal was had in a marquee erected in the grounds.

Ernest Ibbetson born about 1830 in London was Lieutenant in Hertsfordshire Militia and Captain of 29th Middlesex Riffles, later a Major. He and his wife Frances lived at Heath House for many years and can be found in the 1861, 1871, 1881 census.

From the map it looks that Little Heath House and the chapel were roughly where Hargeaves Scout Camp is today or very close by.

** Update, Ron Jeffries’ soon to be published book “Aldborough Hatch – The Village in the Suburbs – A History” will include information on St James’ Church, Little Heath as well as St. Peter’s Church, Aldborough Hatch. Further information can be seen here: http://www.stpetersah.org.uk/ **